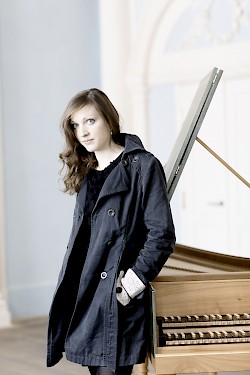 Harpsichordist Elina Albach and her ensemble CONTINUUM are interested in presenting the repertoire of the Baroque, with all of its rich and diverse texts in a contemporary context. She is interested not only in the specific, immediate concert form, but rather in creating a contemporary repertoire using the potential of versatility found in period instruments.

Elina Albach began her studies at the Schola Cantorum Basiliensis (Switzerland) with Joerg-Andreas Boetticher in 2009 and in June 2014 she graduated with distinction. She has studied harpsichord with Ton Koopman and Rudolf Lutz amongst others.
Elina has been invited to concerts and festivals in Europe, Australia and South America, such as Bachfest Leipzig, Thueringer Bachwochen, Festspiele Mecklenburg-Vorpommern, Kunstfest Weimar, Sydney Festival, Resonanzen Wien, Holland Festival etc and her performances have been broadcasted on SWR, MDR Figaro, Deutschlandradio Kultur, NDR, BR.

In 2011 she won the first prize at the “Gebrueder-Graun” and having participated in the “Deutscher Musikwettbewerb 2012” was awarded two scholarships from the “Bundesauswahl Konzerte Junger Kuenstler” for the season 2013/2014 and in 2013 Elina won the second prize of the Berliner Bach-Wettbewerb. 2016/2017 Elina taught harpsichord, Basso Continuo and Chamber music at Hochschule für Musik Carl Maria von Weber, Dresden.

CONTINUUM’s musical language moves in a sphere between old and new, between the 17th and 21st centuries, between knowledge and innovation, between vocal and instrumental music. A new and promising ensemble, CONTINUUM seeks out new concepts – without losing sight of the original material. Based in Berlin, harpsichordist Elina Albach works together with artists who overcome the boundaries of the established music scene and who aspire to enrich concert life through excellent quality, rather than quantity. CONTINUUM made its debut at the Köthen Bach Festival and at the ION in Nuremberg in Spring 2015, concerts in the WDR Funkhaus concert series in Cologne and at the Thuringia Bach Festival 2016. In April 2016, CONTINUUM toured Bolivia by invitation of the Goethe Institute. The ensemble’s first CD recording, a co-production of Bayrischer Rundfunk, is due to be released in April 2018. Current engagements in 2017 include Radialsystem V, Int. Händelfestpiele-Göttingen and CONTINUM is chosen for the EEEmerging Residence Programm in Ambronay/France, 2017.